The Human Torando will kick your ass.

George Stiehl and I were sitting in Wok n’ Roll Friday night, eating sushi and drinking beer and unfiltered sake. We were having a great time getting drunk and checking out the groups of ladies who were out showing off their wears. After we left the restaurant we got a bottle of bourbon. I was buzzing with excitement. I had finally, at long last, got a copy of Rudy Ray Moore’s magnum opus “The Human Tornado”. 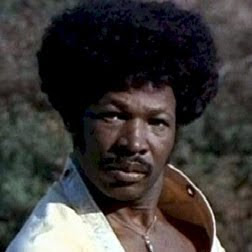 He will own you.
For those of you who don’t know who Rudy Ray Moore is, he’s a comedian who gained stardom with his first record “Eat Out More Often”. This allowed him to gain enough funds to make his first film “Dolemite”. This film had everything for greatness…violence, sex, dancing, and comedy. Needless to say it became a success. What more can you say about a movie with lines like “You insecure-born, rat soup eating, jock-jawed, motherfucker!” other then greatness is bound to ensue.

Moore made “The Human Tornado”, the sequel to “Dolemite” in 1976. According to Moore this film is his favorite movie. One can see why. The film opens with a party at Dolemite’s mansion. While his friends are having a good time (a young Ernie Hudson is in the film as one of Dolemite’s friends), Dolemite is screwing some white chick in his room. Well, in Dolemite’s world, if there’s a group of brothas and sistas having a good time, some crazy-ass, racist sheriffs going to show up and rain on the parade. But are you ready for this? The aforementioned white chick is the sheriff’s wife! “He made me do it!” she cries, in which Dolemite replies “Bitch, are you for real?” Insert shootout here. Dolemite is now on the run.

The film goes into overdrive from there. There are some scenes that make you both laugh your ass off and scratch your head. When he has sex with the villain’s wife, he literally destroys the room with his “sexational” abilities. He is after all the Human Tornada’! The fight scenes offer sped-up footage, and over dubbing that doesn’t sync to the footage. Moore’s main martial art form consists of him engaging the enemy while sporadically shaking his head back and forth, making a sound similar to when you get into a really cold bath tub (see the sample to the left).

Do your soul a favor and see this film. I watched this film 4 times in two days. Everyone who watched it wants to see the rest of his films. There is a power with this film that takes you on a magical ride into film-watching ecstasy. Scorsese? Spielberg? They can lick Rudy Ray Moore’s balls. My new goal is to see him live. Then I can die happy.

NOTE: I wrote this back in 2004... unfortunately Rudy Ray Moore died in October of 2008. I think we should all have 10 days of silence in remembrance of this great man.