My Gunfighter art turns up in the craziest of places...

About a thousand years ago I made an image that was used in a book called Ghost Towns that had an image of a Skeletal Gunfighter. 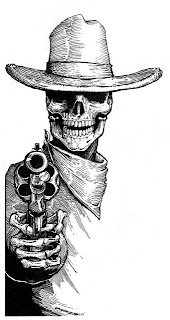 Since drawing this image I've made it into shirts and prints and other such stuff. It's one of the images that people seem to gravitate to and it's the most requested design for shirts as well as getting variations done graphically for law enforcement and fire-fighters.

I've also seen it in the strangest places. Places I would never expect.Poop your pants places...

For example, a friend of mine Bob emailed me and told me that he'd seen this piece in a movie about poker. So I checked it out and send it to my friend Bill Shafer who's got a hungry mad-on for Poker. He got back to me quickly.

"Do you play poker?" he asked me.
"No, not really? Does Intellivision count with the little yellow guy?"
"That guy wearing your shirt is my favorite player of all time Phil Laak! They call him the Unibomber! Holy shit!"
Cue Bills complete "shit-out"... 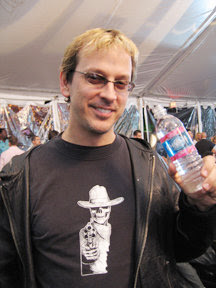 Phil Laak
This made me happy like some douchey schoolkid. I learned more about this guy and realized that the guy rules. A) His nickname is The Unibomber for jumping fucks sakes and anyone named after criminals is cool. Small fact: My nickname in high-school was John Capone Hitler Dahmer. B) He makes his living gambling. How much of an extreme bad ass can you be if that's your career? Kenny Rodgers don't have shit on this guy. Poolhustlers, gamblers and con-men...you need balls of titanium to be either. C) His partner who he's also going out with Jennifer Tilly. Jennifer Tilly from Bride of Fucking Chucky!

Phil Laak's Girlfriend Jennifer Tilly. She...uh...plays poker too...
I'm honored to have this gentleman be in a picture, on the web, wearing a design I did.
And then...

I had another friend of mine named Johnny call me up during my 21 Jump Street re-runs (Booker's a good cop damnit!) and tell me that he saw my gunfighter on a show on the National Geographic Channel. Cool, I thought... maybe some Ugandan Tribesman has it on a shirt or something.
Nope... it was from a show called "American Gangs" and it was a tattoo on some guy in a Texas Prison who's in the Aryan Nation. 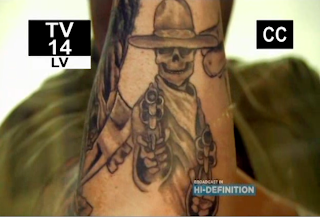 Some guy in a Texas Prison. This is his arm. It's probably committed some kinda crime.
And I gotta tell you, I got kind of a kick out of this too. Granted the guys in prison and he's all about the White Power and all of that kind of goofy shit. But to me it was kind of a badge that there are some crazy, scary, and psychotic motherfuckers out there who like my art and are willing to get it blasted into their skin who would probably back me up in a bar fight.
And isn't that why we get into doing art in the first place?
Posted by D.W. Frydendall at 7:29 PM